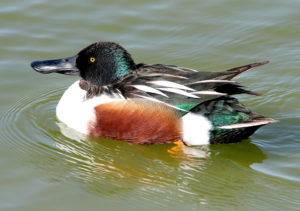 Physical: Northern shovelers are named for their uniquely-shaped bill that is wider at the end, forming a “shovel” like shape. They are typically 17-20 inches (44-51 cm) long with a 27-33 inch (69-84 cm) wingspan. Males have a green head, white chest, brown sides, black bill, and blue upper wing. Females have a mottled brown coloration and orange bill.

Feeding: Northern shovelers feed on aquatic invertebrates by filtering water through their bill, which is also known as dabbling.

Breeding: Courting typically involves a series of displays such as wing flaps and head movements. Nests are typically on the ground, surrounded by vegetation and nearby water. A clutch laid in the nest will have approximately 8-12 eggs.