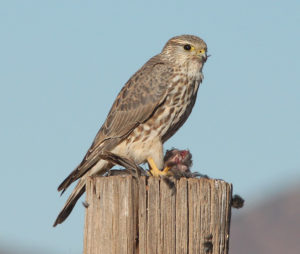 Physical: Merlins are small falcons between 9.5 and 12 inches (24-30 cm) long with a 21-27 inch (53-68 cm) wingspan. In flight, their silhouette is similar to that of a pigeon, with pointed wings and a medium-length tail in proportion to their body. Coloration can vary between geographic locations and is generally dark with streaks of brown or black on the breast and underside of wings. Males typically have a grey coloration along the back and wings while females are browner. Their tails are also usually dark brown with white bands visible on the underside.

Habitat: Merlins typically inhabit trees nearby open areas such as marshes, lakes, fields, or forest clearings. Additionally, there are merlin populations in boreal or prairie habitats throughout North America that are more specialized to those ecosystems. After migrating, individuals stay in the same habitat type within their winter range, extending as far south as Ecuador.

Feeding: This species of falcon’s diet is composed of mostly birds and occasionally large insects or bats. The open habitat types it lives in allows for merlins to catch other birds while in flight, and will even occasionally work in pairs to disperse a flock of birds. This behavior is distinctly different from other birds of prey which typically dive or attack from above. Merlins will drive birds up from the ground and force them to fly higher until they are unable to continue fleeing.

Breeding: Males make use of their highly skilled flight while courting females, using patterns in flight to display their capacity as a mate. Merlins typically reuse the nests of other birds of prey as well as crows, not building their own. These are normally on the edge of a treeline so they are able to view an open area and spot prey. Sometimes they can also be found nesting on cliffs or in tree cavities. In these nests, a clutch will have 4-5 eggs that are then raised by the parents.