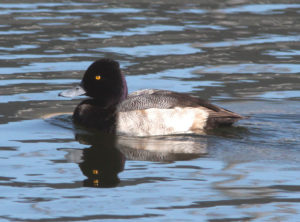 Physical: The lesser scaup is similar in appearance to the greater scaup, but can be distinguished by the more pointed and purple head. Males have a blue bill, black and white back, and yellow eyes. Females are a mottled brown color and typically have a white patch near the bill, but this is not always present.

Habitat: This species lives near bodies of water, both brackish (a mix of salt and fresh water) and freshwater. Typically inhabiting wetlands.

Feeding: Lesser scaups feed on aquatic invertebrates, insects, and plant material. This species dives to retrieve food from the substrate of a body of water.

Breeding: Males court by making displays such as wing/tail flicks and flattening feathers on the head. Females respond with various calls and head movements. Nests are made on the ground in tall vegetation to conceal them from predators. A clutch typically contains 6-14 eggs.