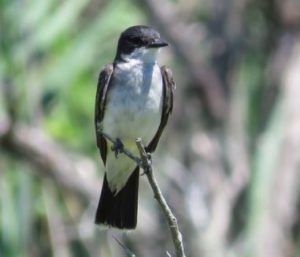 Physical: Eastern Kingbirds are black and white in coloration. The underside, breast, throat, and end of the tail are white. The back, wings, head, beak, and remainder of the tail are black with the coloration of the head being darker than the rest. This species is 7.5-9 inches (19-23 cm) long with a 13-15 inch (33-38 cm) wingspan.

Feeding: Eastern kingbirds feed on insects, catching them while in flight and sometimes eating them before landing when possible. Larger insects are caught midair and then eaten after perching. Their diet is also supplemented by seeds and fruits when insects aren’t available.

Breeding: This species uses flight displays to find mates, and the pair will typically reunite each year using this display in the same territory. They are very aggressive in defending territory from other eastern kingbirds and even larger predatory bird species. Nest sites are found in exposed branches on trees and are sometimes reused by the same pair in following years, containing a clutch of 2-5 eggs.