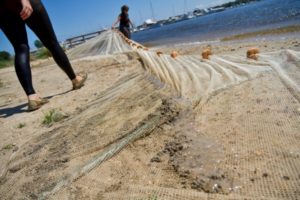 The BBP, in partnership with Conserve Wildlife Foundation, launched a sea nettle barrier pilot project during the 2011 bathing season at two beach locations, Lavallette’s bay beach at Brooklyn Avenue and Brick’s Windward Beach on the Metedeconk River (map below).  A prototype barrier net was installed around each bathing area to study its effectiveness in limiting contact between bathers and any stinging sea nettles that may have been present.  The barrier net was deployed twice a week at each location, weather permitting.  It was set up in the morning and removed that same afternoon.  Twice a week at each beach, Partnership staff seined both inside and outside the protected area before removing the net.  Any jellyfish, fish, and crabs captured by seining or the barrier net were identified, counted, and measured.  Water quality data was also recorded.  (The photograph above of sea nettles captured in the seine net is courtesy of Lindsay Lazarski, NewsWorks.org.) 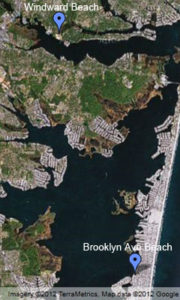 This pilot project was designed to obtain data about sea nettle populations in the bay and its tributaries, test the effectiveness of the barrier net in excluding sea nettles from bathing beaches, and collect information about any impacts the net may have had on other native fauna.  A total of approximately 14,000 sea nettles were captured and measured during the project (from June through September, 2011), and impact on non-target species was minimal.

While in the field, BBP staff members were able to educate curious beach-goers about the possible causes of the increase in sea nettle numbers and encourage good stewardship of the bay and its resources.  The BBP’s rack card, Get informed about Stinging Jellyfishes in these waters answers common questions about the presence of sea nettles in the bay.

The project continued in the summer of 2012 in both Brick and Lavallette.

The sea nettle barrier project will not be repeated in 2013, since the participating towns are focusing their resources on recovery from Superstorm Sandy.

Check out our weekly sea nettle status updates and other videos here:

Sea nettles in the Chesapeake Bay

REPORT YOUR OWN SIGHTINGS