Jellyfish Barrier Nets – Do They Work?

An article about a BBP research project studying the effectiveness of barrier nets in limiting contact between bathers and bay nettles (a type of stinging jellyfish) has been published in "Ocean & Coastal Management."

A newly published peer-reviewed article in Ocean & Coastal Management reports the results of a BBP project studying the effectiveness of low-cost barriers in limiting interactions between bathers and stinging jellyfish. The BBP conducted the “Bay Nettle Barrier Pilot Project” during the 2011 and 2012 bathing season at two beaches, the Lavallette bay beach and Windward Beach in Brick. BBP scientists installed a prototype barrier net around each bathing area to study its effectiveness in limiting contact between bathers and any bay nettles that may have been present. Used twice a week at each location, weather permitting, the barrier net was set up in the morning and removed the same afternoon. 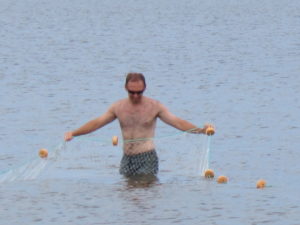 BBP researchers seined both within and outside the protected area before removing the net. They identified, counted, and measured any jellyfishes and fishes captured by seining or in the barrier net itself. They also recorded water quality data. This pilot project was designed to test the effectiveness of the barrier net in excluding bay nettles, gather information about any impacts the net may have had on other bay animals, and obtain data about bay nettle populations.

Highlights of the research findings include:

The full paper can be viewed or downloaded here.