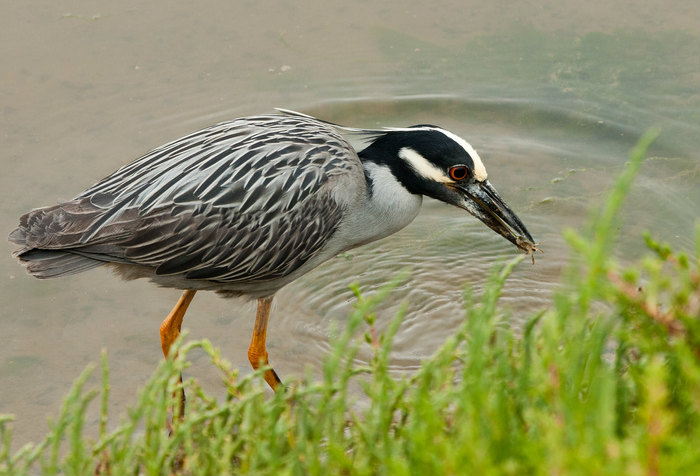 Physical: The yellow-crowned night heron averages 56-69 cm in size.  Adults are slate-gray and have black heads with a white streak along the side and a yellow crown and plumes.  They have yellow to orange legs and black bills.  Juveniles are grayish brown and speckled with white dorsally.

Habitat: Yellow-crowned night herons live in wooded wetlands and in thickets along the coast and on the banks of rivers feeding into the bay.  They nest on barrier islands and dredge spoil islands containing forested wetlands or shrub thickets.  During the winter, they migrate to the Gulf Coast or the southern Atlantic Coast as far north as South Carolina.

Feeding: They  hunt along tidal creeks and tide pools in salt marshes.  Their prey are generally many types of crabs or crayfish when preying in inland freshwater environments.  These birds have been found to swallow prey hole or, like with some crabs, impale first to paralyze and make it easier to handle.  They will hunt either day or night depending on competition from other coastal birds.

Breeding: Yellow Crowned Night Herons lay 3-5 blue-green eggs in a nest built of sticks, usually in a tree but sometimes on the ground.  Breeding grounds range from New England to Florida.  The time of breeding may vary on the availabilty of coastal crabs which can depend on the temparatures of each spring.