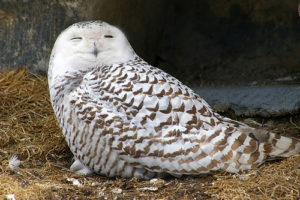 Physical: Snowy owls are a large owl species that is predominantly white with dark brown-black marks along the entire body besides the face. Their head is rounded and lacks feather tufts, typically having yellow eyes. Male snowy owls have fewer markings and become even whiter with age.

Habitat: Snowy owls inhabit completely open spaces such as fields, beaches, and tundras. Open habitats allow for individuals to spot prey from far distances. This species can be seen on beaches along the Barnegat Bay during the winter months due to their migration pattern.

Feeding: Their diet consists of small mammals, such as rodents, and smaller birds. Depending on the availability of prey species, this can also include larger birds such as waterfowl.

Breeding: In courting, male snowy owls will bring prey to the female while performing a flight display. The male will form his territory and defend it, and the female mate chooses a nest location. Nests are formed by scratching at the ground to make a shallow hole in which the clutch of 3-11 eggs is laid.