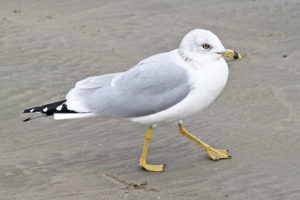 Physical: This medium-sized gull has long, thin wings and a short, yellow beak that has a distinct black “ring” marking around it. Ring-billed gulls are 17-21 inches (43-54 cm) long with a 43-46 inch (105-117 cm) wingspan. Adults have a white body and head with grey coloration on the back and upper side of the wings.

Habitat: Ring-billed gulls are commonly found in coastal habitats such as estuaries, marshes, and beaches. They will travel further inland than most gull species and may be seen in even urban or agricultural areas.

Feeding: This species has a highly varied diet, including insects, fish, rodents, plant material, and human garbage. In urbanized areas, these gulls will scavenge for discarded food from people. Fish make up the largest portion of their diet in coastal habitats, and the overall composition of the diet is based upon the habitat type in which the individual lives.

Breeding: Ring-billed gulls nest on the ground in large colonies, which provide protection from predators. The male and female of a pair work together to build a nest that will then contain a clutch of 2-4 eggs.