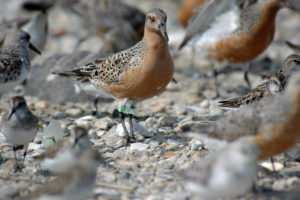 Physical: Red knots are a species of sandpiper with a long beak and legs that are dark in coloration. This species is 9-11 inches (23-27 cm) long with a 22-24 inch (57-60 cm) wingspan. The back and tail are typically mottled with various shades of brown while the stomach, throat, and face are orange-red in coloration.

Habitat: Red knots are typically found along coastlines, in habitats such as marshes, swamps, beaches, estuaries, bays, and sedges. Sometimes they can also be seen further inland at freshwater habitats.

Feeding: This species feeds on bivalves and other aquatic invertebrates, including mussels, clams, shrimp, and marine worms. Along the Barnegat Bay, red knots are known to feed upon horseshoe crab eggs during spring migration.

Breeding: Male red knots establish territory before the females arrive at the nesting grounds, and will prepare up to five nesting sites to aid in courtship. These sites are on the ground in dry areas of their typical habitat, in which a clutch of 3-4 eggs will be laid. Both males and females are known to incubate the eggs and are thought to be monogamous during the breeding season.