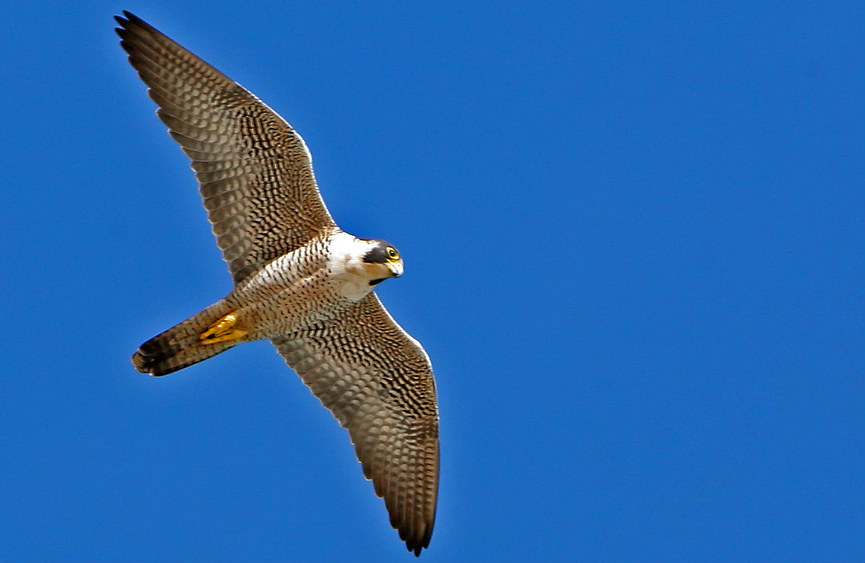 Physical: The Peregrine Falcon has very distinct features that separates them from other birds of prey. This very quick predator (dive in excess of 200 mph) has black eye markings and very long pointed wings. They also have extremely sharp talons and very good eyesight. They don’t get much bigger than a crow.  Their feathers are usually a light to dark brown pattern and can have bright yellow or black beaks and yellow legs and feet.

Habitat: F. peregrinus habitat is located in salt marshes, back bays, and local streams and rivers. They can be seen flying over open fields and diving down to capture prey. They are common during all seasons in the New England area and found commonly during the winter in the more southern parts of the coast.

Feeding: The falcon is a raptor bird therefore it is mainly a carnivore. Their prey is generally fish, small ducks, reptiles and small mammals.  Their methods for caputring prey are most notable for the quickness of of the falcon dives or swoops in to catch its target.  They have also been noted to fly low over land and water to suprise unsuspecting prey.

Breeding: F. peregrinus makes nests in high areas and will not tolerate human interference. They lay 3-5 eggs a year in March and hatching occurs in May. The young learn to hunt and fly from their nests. Their young is able to fly around 39-49 days after hatching.