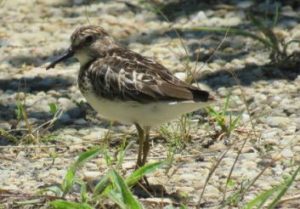 Physical: Least sandpipers have a mottled brown coloration with a white underside, yellow legs, and a long brown beak. Their long legs proportional to the rest of the body are typical of sandpiper species. This species is 5-6 inches (13cm-15cm) long with a 10.6-11 inch (27-28 cm) wingspan.

Habitat: This species typically inhabits coastal and inland habitats along bodies of water. Least sandpipers are commonly seen breeding and nesting in the tundra and wetlands of Canada.

Feeding: Least sandpipers feed on insects and aquatic invertebrates such as gastropods and crab eggs. Feeding is typically accomplished by foraging through mud or vegetation.

Breeding: The males of this species will display with both calls and intricate flight patterns, and also will drive other males out of the territory until a mate is found. Aggression decreases after pairs are formed, and both parents assist in the incubation of eggs. Nests are built on the ground with dried vegetation lining the scrape into the ground, and a typical clutch will contain 3-4 eggs.