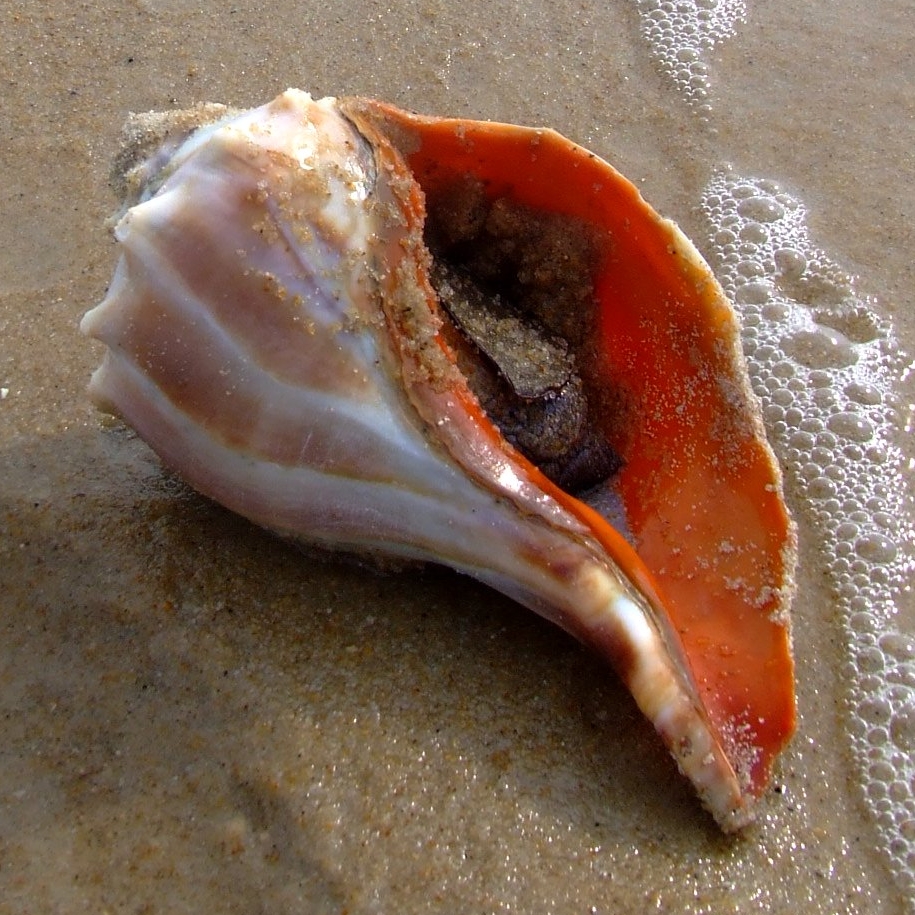 Physical: The Knobbed Whelk is the official state shell of New Jersey. Knobbed Whelks are large marine gastropods (snails) with spiral shells opening on the right side.  The outer shell is grayish white to tan, while the inner shell color ranges from light yellow to orange. Adults grow 5-9 inches in length. Females are larger than males; adults may start out as males and change into females as they get older, which would explain why females are generally larger.

Habitat: Knobbed Whelks live in tidal estuaries on the Atlantic coast from Massachusetts to Florida.  In the spring and fall, they live in shallow water or subtidal mud or sand flats.  During the temperature extremes of winter and summer, they move to deeper offshore water.

Feeding:  Knobbed Whelks are predators feeding on clams, oysters, and other bivalves. They use their strong foot to move along the bottom of the bay as they search for food.  A Knobbed Whelk uses its foot to hold its prey and its shell edge to pry open the prey’s shell, similar to using a clam knife to open a clam.  It then inserts its long proboscis (tubular mouth part) to eat the soft flesh of its prey. Another feeding strategy is to use chemical secretions from its proboscis to drill a hole in the shell of its prey to reach the soft flesh.

Breeding:  In spring and fall, females lay a string of up to 40 egg capsules that are anchored on one end to the sand.  Each capsule holds up to 100 fertilized eggs and provides protection as the embryos develop.  When the eggs hatch in three to 13 months, the juvenile whelks leave through an opening in the capsule.

Predators:  The Blue Crab is a predator of the Knobbed Whelk.  Humans also use them for food and collect their shells.