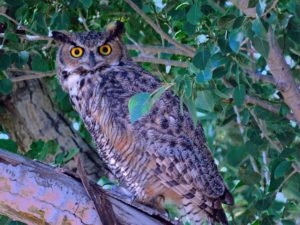 Physical: Great Horned Owls have a mottled grey-brown coloration over the entire body with a white throat patch and a rounded red-brown face. The “horns” by which this species is identified are 2 tufts of feathers on top of the head. These are a large species of owl 18-25 inches (46-63 cm) long with a 40-57 inch (101-145 cm) wingspan. They can also be identified by their distinct and rhythmed hoot, with the female’s call being higher than that of the male. Great Horned Owls also have a variety of other calls such as hissing, screaming, cooing, whistling, and barking.

Habitat: This owl species is found in a variety of habitats such as forest types, agricultural lands, fields, and wetlands. They can also be spotted in suburban and urban areas such as wooded parks.

Feeding: Great Horned Owls have a large range of prey types, from insects and small rodents to other raptors and larger mammals. They are also known to feed on reptiles and fish when available within the habitat. Typically hunting at night, this species will follow prey once spotted while perching until they are able to dive and catch the prey.

Breeding: Individuals remain within the same territories outside of the breeding season, but will start to roost with a mate during the breeding season. Nests are usually built by another species and then utilized by the owls. Over the course of the season, a pair will have one brood with approximately 1-4 eggs which are incubated and raised upon hatching. After the chicks have permanently left the nest that site is not normally used again by the pair in the following years.