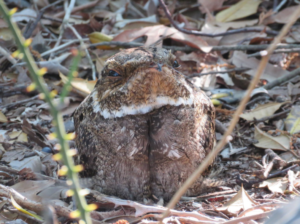 Physical: Chuck-will’s-widows have a mottled coloration of brown and black. They have a unique flattened head shape seen in nightjar species. The sexes in this species are the same size at 11-12.5 inches (28-32 cm) long with a 22.8-24 inch (58-61 cm) wingspan. Similar in appearance to the Eastern Whip-poor-will but can be distinguished as the Whip-poor-will is both smaller and more grey in coloration. The common name comes from the song’s unique pattern, “chuck-will’s-widow” that is typically has a quiet “chuck” and becomes louder for the remainder of the song.

Habitat: Chuck-will’s-widows are found in both pine and oak forests, typically inhabiting fields and woodlands within these habitats. Their range spreads over Southeastern and Mid-Atlantic regions in the United States, migrating as far as the Caribbean.

Feeding: Chuck-will’s-widows feed on flying insects while foraging at dawn or dusk, but can be seen foraging at night when there are human light sources or light from a full moon. Mainly consuming moths and beetles, they are rarely seen feeding on small bird or bat species.

Breeding: Males exhibit territorial behavior using calls and chasing prior to breeding season. When courting females, the males make themselves appear larger by spreading out their wings and tail, ruffling their feathers, and puffing up with air.