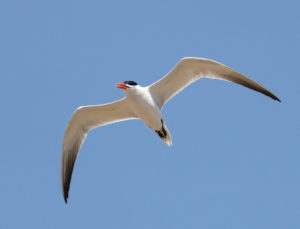 Physical: Caspian terns have a similar appearance to gull species but can be differentiated by the thin shape of their wings as well as the black “cap” on their head. This species is 18.5-21 inches (47-54 cm) long with a 50 inch (127 cm) wingspan. Their long red beak is also key to their identification and can also have a slightly darkened coloration on the end of it.

Feeding: Due to their coastal habitat type, Caspian terns typically feed on only fish and occasionally invertebrates when needed.

Breeding: Caspian terns nest in colonies on beaches, with the nest itself being a hole in the ground lined with sticks, vegetation, or rocks. A typical clutch in the nest will contain 1-3 eggs.