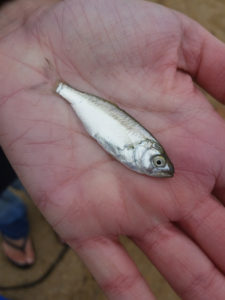 Physical: Bluefish have a dark to green blue dorsal surface, and are blue to silver laterally. The body shape is elongated and compressed, with a large head and prominent teeth. The primary dorsal fin has seven to eight spines. They can be up to 31 lbs and exceed lengths more than 3 feet.  Juvenile Bluefish are similar in appearance to the adults, with no major distinctions in morphology occurring between life stages.

Habitat: P. saltatrix can be found worldwide. They are both tropical and temperate, a coastal species often found in large schools with large migration ranges.  In the summers large amounts are found from Maine down to North Carolina.  Some schools of this species can span tens of square miles. Developing juveniles spend their formative months in estuaries, bays, and sounds. The inshore waterways provide anchored, solid structures for protection, refuge, and hunting grounds

Feeding: P. saltatrix are highly predatory and are opportunistic feeders.  They are carnivorous, and their prey range from menhaden to mackerel and herring.  Because of their size, they have few predators. Juveniles are carnivorous, and tend to eat anything smaller than themselves that they can catch.

Breeding: In the mid-Atlantic, Bluefish spawn during summer, peaking around July. Most spawning occurs over the outer continental shelf. They are mature at two years, with females producing up to 4.5 million eggs.

Breeding: Maturity is reached at two years. After the summer spawn, juveniles move shoreward. Developmental years are spent in protected areas such as bays and sounds.