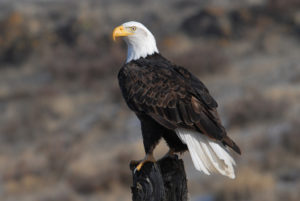 Physical: Bald eagles are one of the largest birds of prey in North America, at 28-38 inches (71-96 cm) long with an 80.3 (204 cm) long wingspan. Adults can be readily identified by their bright white head and tail, which contrasts with the dark brown coloration of the rest of their feathers. This species also has a distinct yellow coloration on its beak and feet.

Habitat: Bald eagles typically inhabit woodlands near open bodies of water, such as rivers or lakes. Trees provide opportunities for both nesting and perching and being near water allows them to have easy access to prey. In winter, they can also be found in more open habitats near water.

Feeding: Being nearby water allows for bald eagles to often feed on fish, which are the dominant prey type of this raptor’s diet. Bald eagles are also known to feed on other prey, including reptiles, amphibians, birds, small mammals, and birds. They will both hunt and scavenge depending on food availability.

Breeding: Bald eagles have a very unique courtship method, in which the pair flies to a high elevation and locks their feet together, after which they begin to rapidly fall until releasing each other just before impact to fly apart. Nesting typically takes place in trees, where they construct extremely large nests. These nests can be up to 6 feet in diameter and 4 feet tall and will contain a clutch of 1-3 eggs. The site is often reused multiple times and added to when needed.