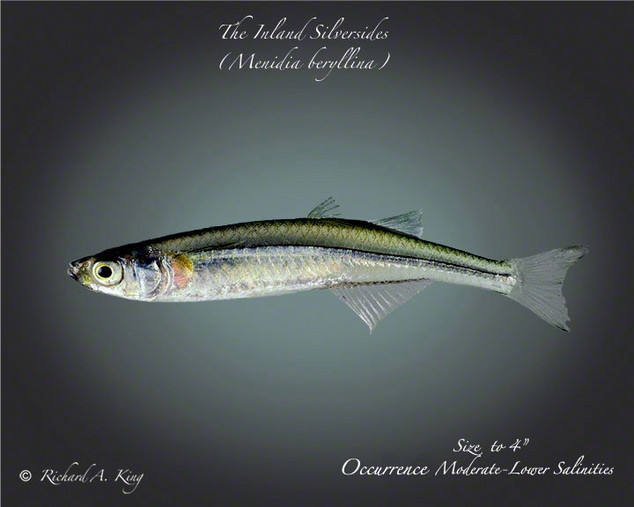 Physical: Silversides are small schooling fish, gray-green to silver in coloration with a lateral silver stripe. M. menidia can be up to 5 inches in length.  They are well characterized by the bright silver sheen when hit by light and the large eyes in comparison to the rest fo its relatively small body.

Habitat: Silversides are a coastal species, living along sandy shores and the mouths of inlets. They range from the Gulf of St. Lawrence to northeast Florida.  Their ability to endure varying salinities allows for a wide range of livable habitats.  During winter periods they recede to lower areas to avoid the colder surface temperatures.

Feeding: Silversides feed on zooplankton and phytoplankton.  This includes, but is not limited to, copepods, isopods, and a variety of algaes and marine vegetation.  They themselves are a critical prey to many shore birds and other local fish.

Breeding: M. Menidia spawn during daylight hours from March to July. Breeding is linked to the lunar cycle, and spawning only occurs during new or full moon cycles.  They have a limited life span of only around 2 years but many die after only a one year life cycle.