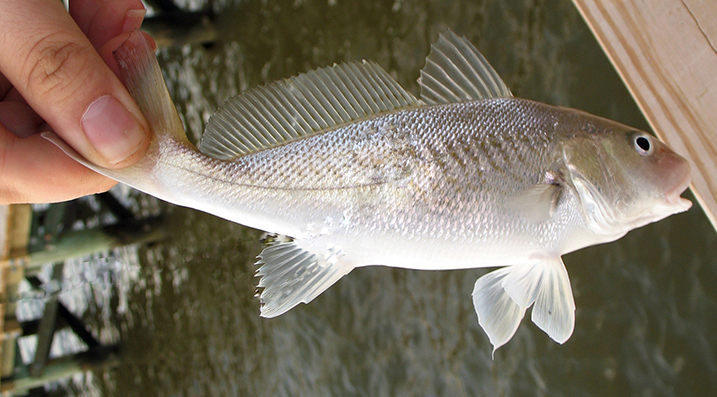 Physical: Croaker are dark gray-silver to blue in color, with small dark dots forming irregular horizontal patterns.  Average size is approximately 18 to 20 inches but can measure up to 24 inches.  It has several whisker like apendages under it’s mouth and a recession in part of the dorsal fin

Habitat: M. undulatus occur along the Atlantic coast from Cape Cod south, extending to the coast of Mexico.  They are an abundant inshore fish, and take shelter in muddy and sandy areas

Feeding: M. undulatus are opportunistic  bottom-feeders.  They consume a variety of invertebrates and smaller fish

Breeding: Mature Croaker spawn over the continental shelf beginning in early September and continuing through December.  Females are mature around 3 yrs., while males reach maturity by 2 years.  Juveniles prefer low-salinity open water.  Life expectancy for the croaker averages 7 to 8 years.  Their name is derived from the noise they make during spawning season when muscles vibrate against their swimming bladder.