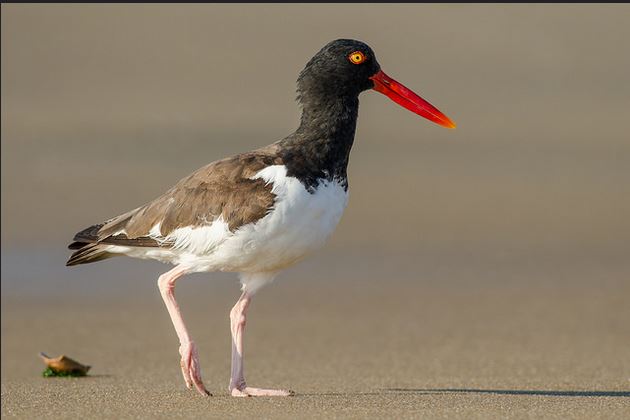 Physical: Oyster Catchers reach from 43-53 cm in length.  They are patterned with blackish brown and white dorsally and white stripe on their wings.  Their noticeably dark orange/red bills are long and narrow, with redish-pink legs and feet.  Their eyes also yellow with an orange surrounding.

Habitat: H. palliates live on sandy and pebbled beaches, mudflats, and the borders of salt marshes.  They hardly venture inland as to stay near their preys general location.  They winter from North Carolina on south.

Feeding: Oyster Catchers predominantly eat mussels, barnacles, and snails.  Their diet also includes other bivalves astheir name suggests.  They have also been noted to eat sea urchins, starfish, and worms on occassion.  They do not stray much from marshes, beds, or inlets where these prey reside.

Breeding: H. palliates lay 2 to 4 buff eggs marked with brown.  They are laid in a shallow depression usually lined with shell fragments.  They breed along the coast from Massachusetts southward.  They will perch nests at the top of dunes for clear small areas in beach grass or marshes.  These areas may be hard to come by occasionally, forcing Oyster Catchers to settle closer to high tide lines making them pervious to destruction on especially high tide seasons.