Legendary Still Family of the Pines

In this second of two talks by John Volpa, the Director of Education for Pinelands Adventures, you'll learn about a little known part of Jersey history. If you’ve seen the 2019 Oscar nominated film Harriet, which chronicles the life of Harriet Tubman, then you were introduced to one of the Still brothers, William, an Underground […]

Within the past decade, New Jersey has experienced its wettest and warmest years in over a century of observations. Extreme events of late, including Sandy, Irene, and a number of hot summers, suggest that something is happening to NJ's climate regime. Add these short-term events with underlying climate change, including sea level rise, and the […]

Getting the Dirt On Your Soil: Root Out Soil Compaction 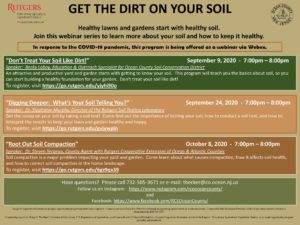 Part three of the Getting the Dirt On Your Soil fall webinar series. In this final webinar, Dr. Steven Yergeau, County Agent with Rutgers Cooperative Extension of Ocean & Atlantic Counties, gives a talk on soil compaction. Learn about what causes it, how it impacts soil health, and what to do about it in your […]

We use cookies to ensure that we give you the best experience on our website. If you continue to use this site we will assume that you are happy with it.OkPrivacy policy